Police Chief Frank Bennett vaulted up the steps of the Trout Run Town office powered by flash of inspiration that had struck in the middle of the night. Eager to share it with his second in command, he dashed past Doris, as ever on the phone, and flung open the door to the office he shared with Earl. 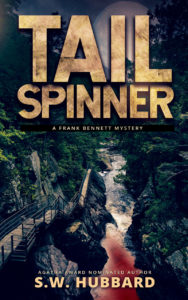 Frank glanced at the clock. 8:15. Very unusual for Earl not to already be at his desk scanning any reports that had come in overnight from the State Police. The squad car was parked out front, so he wasn’t out on a call.

Frank returned to the outer office and stood in front of Doris until she acknowledged his presence with her gaze even as she continued her conversation about the best way to get a grease stain off a tablecloth. “Where’s Earl?”

Doris shrugged while writing on a scratch pad. She held up the paper for Frank to read: Not in yet.

Frank sighed and returned to his desk. He was restless to set his plan into motion. The summer concerts on the green were due to start next week, and Frank thought he’d finally figured out a way to control the traffic flow in the center of town. If this plan worked, directing traffic wouldn’t be a two-man job, so one of them could keep an eye on the crowd of concert-goers. And, as an additional benefit, listen to the performance. But the plan required a series of signs, and he wanted to map them out with Earl.

Frank looked at the clock on the wall for the third time in five minutes. He was positive his plan would work. Maybe he’d just call the road department to order the signs right now. His hand hesitated on the phone.

What about that third turn? Earl would have some ideas. He’d better wait. Frank busied himself looking through the state police reports that had come in over night.

When he reassured himself that no dangerous criminal activity had occurred anywhere near his turf yesterday, he glanced at the clock again. 8:35. Had Earl told him that he’d be late? Had he forgotten? Or was there a problem? Just as he picked up his phone to call Earl, the familiar Ford pickup rolled into the parking lot.

Earl slid into his chair with his eyes downcast and fired up his computer. “Sorry I’m late. I overslept.”

Overslept? Earl was always up with the birds. No matter. Frank launched into his road sign plan as he dug through a filing cabinet looking for last year’s concert parking diagram .

“Whattaya think? Will it work?” Frank slammed the drawer and spun around.

For the first time that morning, Frank looked closely at his assistant. “You look kinda pale. Are you feeling okay?”

“Just a headache,” Earl said. “Do we have any Tylenol?”

Frank tossed him theplastic bottle. Earl raised his hand a moment too late, and the bottle ricocheted into the middle of the room.

Frank picked it up on his way to show Earl a comparison of the two diagrams. “I think if we keep the cars flowing in one direction around the green, and then block off Chesnut Street, we can create a parking area with one entrance and one exit, instead of the free-for-all we had last year. Except I’m worried about this turn. Do you think people will peel off and try to go in the other direction?

Frank tapped the diagram. “Right here. Do you think—”

Just then Doris entered bearing a Tupperware container. “Look what I brought you, Earl. My sister Gloria made her famous venison sausage casserole. I said, I hafta take some in to Earl. He just loves it.”

The heady scent of onions, game, and fennel wafted through the office.

Earl’s eyes widened. He leaped from his chair and tore across the room, nearly knocking Doris down in his sprint toward the men’s room.

Frank nudged her back toward her own desk. “Better put that in the fridge and save it for tomorrow.”

He now knew what was wrong, but saw no need to share with their gossipy secretary.

For the first time in the five years they’d worked together, Earl was hung-over.

The story emerged after Earl returned, shaky and gray-faced.

“I ran into Billy Flynn at the Stop ‘n’ Buy last night after work.”

Frank knew the guys Earl usually hung around with. Billy Flynn didn’t ring a bell. “Do I know him?”

Earl shook his head. “He’s been in the Marines since before you moved to Trout Run. I hadn’t seen him since high school graduation. He enlisted right after and he’s been all over—Iraq, Afghanistan. Now he’s out and back home in Trout Run. He asked me to go to the Mountainside for a beer.”

“Looks like you had more than one.” Frank was more amused than shocked. He’d never known Earl to drink more than a couple beers.

Earl massaged his temples. “It was the tequila that did me in.”

“Tequila? I didn’t know the Mountainside even stocked tequila.” The nectar of the agave seemed pretty exotic for Trout Run’s grittiest tavern.

“Billy learned to drink it in the Marines. He kept buying more rounds.”

“How did you get home?” Earl was a stickler. He’d write a DUI citation to ladies who’d had two glasses of wine at book club.

“Then I had to go back over there this morning to get my truck. Billy’s truck was still there. He’s only been home a week or so, so he doesn’t have a job yet.” Earl took a long drink of water. “He kept saying how he dreamed of Trout Run every day he was over there fighting. He was so glad to be back. It was hard to say ‘Gotta go. Catch you later’, you know?”

“I understand.” Frank clapped him on the shoulder. “Go on home. Take a long nap. You’ll be fine tomorrow.”

Earl looked at the pile of work on his desk. “But I should—”

“Go. It’ll be waiting for you when you get back.”

Frank set off on the morning patrol with the windows of the department SUV rolled down. The worst of blackfly season had finally passed, and the cool, late June air didn’t require AC.  He drove past the old covered bridge which crossed a Stony Brook still high from all the spring rain. The water could put goosebumps on an Eskimo, but with the school year finally over, the rocks below the bridge would soon be filled with swimmers and sunbathers. But at nine-thirty in the morning, the brook surged over the rocks unimpeded by people.

After he climbed the hill on the other side of the brook, Frank saw two men on ladders taking down the sign in front of the defunct Asian Bistro restaurant. The place had opened with great fanfare last year. It wasn’t often that a new culinary hotspot disrupted the usual routine of eating at Malone’s Diner or the Trail’s End, so everyone in a twenty-mile radius had gone to eat there once. But this ill-considered attempt to bring sushi and pad thai to the North Country was doomed to failure. There simply wasn’t enough customer traffic to ensure the freshness of the tuna and salmon. And men who worked outdoors all day plowing snow or repairing roofs didn’t want a platter of cold raw fish or a bowl of noodles and snow peas for dinner. So the Asian Bistro had closed, and the nice building the investors had built stood empty for months, some forlorn Chinese lanterns over the deck still blowing in the breeze.  The sudden activity of workmen indicated another business was taking a stab at finding success in that spot.

Frank drove on, daydreaming about the possibility of a Bar-B-Que restaurant or a good Italian place. He’d have to ask Doris when he got back to the office. As the issuer of building permits, she always knew what was going on. In fact, it was strange that she hadn’t already mentioned the coming of a new business to town. Then again, perhaps she had somewhere in the daily tsunami of words that Frank tuned out.

Frank made the next turn in his circuit around the outskirts of Trout Run. Two muddy and grizzled backpackers trudged along the side of the road. They’d probably just come down from hiking Algonquin and were heading toward the parking area a quarter mile from the trailhead. When they saw the police car come into view, they suddenly started jumping up and down and waving their hands like bearded cheerleaders without pom-poms.

The two young men crowded around the window of the patrol car. “There’s a guy up there on the trail,” the taller hiker pointed behind himself. “We think there’s something wrong with him.”

“He’s in trouble,” the other hiker chimed in. “He was wandering off the trail with no water. We asked him if he was lost…offered to lead him out. But he ran away from us. He was talking crazy.”

The taller hiker grimaced. “We couldn’t understand him. I mean, the words were English, but he wasn’t answering the questions we were asking. It was like he was having his own conversation with someone who wasn’t there.”

“Dehydration can do strange things to a person,” Frank said. “This early in the morning, he must’ve been out all night to be in such bad shape. You say he didn’t have a backpack?”

Inexperienced, unprepared hikers were a growing problem in the High Peaks. Vacationers came expecting a stroll in the woods and got rugged terrain and changeable weather they hadn’t bargained for. “He must’ve been out in that cold rain last night.”

The hikers nodded. “He was wearing a wet cotton T-shirt and shorts—no fleece, no rain gear.”

“Early twenties, thin. He looked fit enough to hike the trail. He just didn’t have the right gear.”

“I’ll call it in to the rangers. How far up the trail did you encounter him?”

They exchanged a glance. “I think we hiked about twenty minutes after we left him before we got to the trailhead.”

“Thanks—you did a good deed. We’ll take it from here.”

Frank squinted at Mt. Marcy looming on the horizon. It didn’t have to be winter for a person to die of exposure in the Adirondacks.

To continue reading Frank’s latest adventure, pre-order Tailspinner. It will pop onto your Kindle on release day in November.

See what readers are saying!