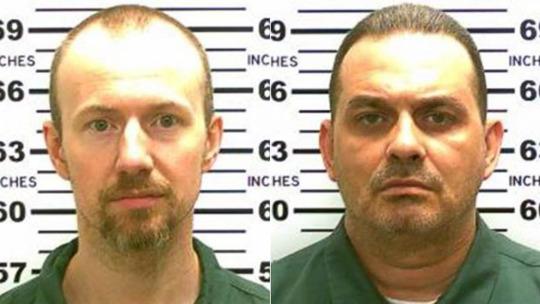 How’s this for the plot of an action thriller? Two cold-blooded murderers cut their way out of their cells using tools smuggled in a package of frozen ground beef (what? Not a baked into a cake?), traverse the heating and water pipes of the prison, pop out of a manhole on the main street of a small town, lead 1,300 cops (1,300!!) on a goose-chase that criss-crosses the state, elude capture for nearly three weeks despite having no money or assistance, and are finally found not more than 30 miles from the prison.

If I could manage to get a story like that past an editor, can you imagine the one-star reviews I’d receive on Amazon? “Preposterous ”… “Outlandish” … “Over-the-top” …“Don’t waste your time.”

Luckily, I don’t write action thrillers; I write character-driven mysteries. So the actual mechanics of the recent escape from Dannemora Prision in the Adirondacks don’t interest me as much as the personalities of the main players. That’s where I see a treasure-trove of possibilities, enough plot ideas to fuel five novels.

First, the convicts: these are not Shawshank Redemption underdogs who were unjustly convicted. No, these two were vicious, guilty-beyond-a-doubt killers, but both men were highly intelligent, capable of long-term planning, and, apparently, quite charming. They used these skills, which could have served them well in a law-abiding life, to make their escape. Instead of being abused by guards, Richard Matt and David Sweat were able to turn the tables and manipulate the prison staff into aiding and abetting them.

They began with Joyce Mitchell, an employee in the prison tailor shop. Joyce, Joyce—I know you well! The small towns in the Adirondacks are filled with Joyces. They belong to the women’s auxiliary of the volunteer fire department where they mix the batter for the annual pancake dinner. They plant flowers in front of the town library and baby-sit for their neighbors. They’re married to cheerful lunks who take them for granted. They’re plain. Hardworking. Unappreciated.

Until one day this salt of the earth Everywoman launches into a liaison with two murderers. She jettisons her respectable life and agrees to go on the lam with them, driving their getaway car. And then, in a blinding “what-have-I-done?” moment, she panics and confesses all. Yes, Joyce is a novelist’s dream. The suppressed rage. The longing to be seen, really seen, as a woman. The astonishment at her own insanity.

Which brings me to Gene Palmer, the guard that Richard Matt seduced, not with romance and sex, but with art. Palmer gave the prisoners access to the netherworld of pipes behind their cells, allowing them to plan their route. This man sacrificed a 28-year career for a few well-executed if not particularly imaginative paintings by Richard Matt. Seriously? An art-loving prison guard? To appreciate the magnitude of what he did, you must understand how highly coveted these prison jobs are in the Adirondacks. They are one of the few positions that provide a good steady income with benefits, allowing a man to stay in the region he loves instead of being forced to migrate for work. Perhaps only a novelist could fathom the twisted relationship between guard and guarded that inspired him to take such a risk.

The final complex character in this tale is the Adirondack landscape itself. Late spring/early summer is not the season that finds the mountains at their best: chilly, rainy, muddy, and most of all, buggy. Hikers and hunters stay home, waiting for the weather to improve. That leaves the dense forest and the network of well stocked hunting cabins wide open and empty, just waiting to absorb two fugitives. Perhaps nowhere else in the country could two men have disappeared so completely, yet still found the sustenance they needed to survive.

By refusing to raise his hands on command when cornered, Richard Matt seems to have chosen suicide by cop. David Sweat, wounded but captured alive, will certainly return to a prison environment much harsher than the one he escaped from. And I will return to writing mysteries set in the Adirondacks with a wealth of new ideas to exploit. Don’t expect a prison break novel, but if you read closely, you might find characters based on Joyce, Gene, and Richard. You’ll certainly see one of those vacant hunting cabins. And you’ll find Police Chief Frank Bennett trying to puzzle his way through the complexities of the human heart. If you haven’t yet read the Frank Bennett mysteries, you can start now with Take the Bait, The Lure, Blood Knot, and Dead Drift.

What’s in a name?
Book Review: The Girl on the Train

One Response to Escaped Convicts in Adirondacks: a novelist’s gold